Making a safe side ensures that the boat kept stable on one or both side(s) by laying the blades flat on the water and leaning slightly to that side. This safeguards balance.

A crew which has not rowed with each other before.

A rower who rows with two oars, one in each hand.

Rowing where each rower has two oars. 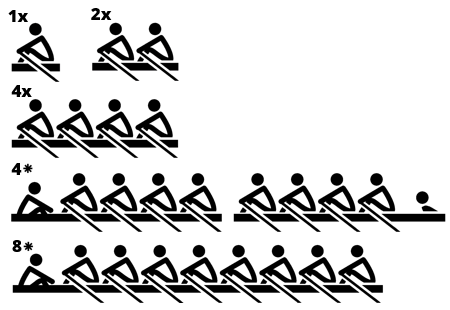 Rigging element that gives the distance between the deepest point at the front of the seat and the water surface. Main article:

Seating positions in a racing shell are generally numbered from the bow to the stern in English-speaking countries, unlike many non-English-speaking countries which count from the Stroke forward. Generally the forwardmost rower is called the Bow and the aftmost rower the Stroke, regardless of the number of rowers in the boat, with all other seats simply being numbered. So for instance the crew of an eight (with coxswain) would number off from the bow: Bow, Two, Three, Four, Five, Six, Seven, Stroke, whereas a four (with or without coxswain) or a quad would number off: Bow, Two, Three, Stroke.

Seesawing of the blade

Seesawing of the blade.

The balance of the boat. Affected by handle heights, rowers leaning, and timing, all of which affect the boat's balance, after which the coxswain tells rowers to "set the boat".

The smooth hull of the boat. Sometimes made from wood but more commonly now from a synthetic material.

When an oarsman's seat moves toward the bow faster than their shoulders. Main article:

Kicking through the seat.

Make a shorter draw. This is often done by rotating the trunk less forward during recovery.

A shell designed for an individual sculler. Very good for skill development, particularly beginners, and a very competitive class at world events, WRC. Extremely rare is the coxed single which is only used as a training boat or for adaptive rowing.

Boat in balance by having one or more rowers lay their blades on the water. Main article:

Thin piece of flat metal or plastic that helps stabilize the shell in the water, and is often positioned so that it protects the rudder.

Rowing mistake where the oars brought back to the catch too high above the water. Main articles:

A thick piece of plastic around the oar to keep the oarlock from wearing out the shaft of the oar.

Rigging element that indicates the distance the seat can move. Main article:

Buckle the knees in, so that the seat slides to the stern of the boat.

Container mistake in which rower makes several mistakes and which arises (the cause) because rowers learn to row with sliding the blades over the water. Main article:

Mistake where the rower bends his legs too early at the recovery. Main article:

Sliding under your shoulders

Sliding under your shoulders.

Mistake where the rower is not sitting correct in the boat. Main article:

A blade design developed by Concept2 in which the face of the oar blade is smooth, without the traditional central spine. Later designs called Smoothie Vortex, Fat Smoothie.

Only applicable for eights. The distance between bowman's puddle on one stroke and the point at which the No. 7 rower catches water on the next stroke.

Rigging element for sculling boats: the span is the distance between the center of both oarlock pins. Main article:

An (informal) match between several teams.

A device hat determines the boat's speed based on the speed of a small propeller and shows this information on the coxbox.

Device that is attached to the stern of a single, double or pair and that shows the speed of the boat during the stroke. Main article:

Term used to describe turning the boat on its axis.

Mistake where the spine is bend and stretched. Main article:

Amount of time it takes to row 500 meters. Displayed on all ergs and on coxboxes with speed indication. It is roughly between 2:30 and 1:30. Calculator:

Rigging element that indicates how far the oarlock extends, measured from the center of the boat. Main article:

The last 500 meters of most races are generally at a much higher rating than the rest of the race, as crews pull to exhaustion.

To turn the oar so that the spoon is at 90 degrees (perpendicular) to the water (opposite of feather). This action should be done early during the recovery to ensure good preparation for the catch. Also see:

Exercise in which the blades should not be turned. Main article:

Mistake where the rower squares his blade(s) too late. Main article:

An anchored boat or pontoon from which rowing boats are held prior to a race starting.

Starboard (or starboard side)

The end of the boat that travels through the water last.

Rigging element that gives the angle (tilting) of the oarlock pin parallel to the boat. Main article:

Mistake where the handle(s) pause for a moment at the finish. Main article:

Mistake where the trunk waits for the arms to be put away. Characteristic of the classic stroke. Main article:

One cycle of the oar. Main article:

The rower closest to the stern of the boat, responsible for the stroke rate and rhythm.

Crew exercise to promote similarity and where the stroke varies stroke rate and power and the crew has to follow within a predefined number of strokes. Main article:

The two rowers closest to the stern of the boat: the stroke and the rower behind him.

The two parts of the draw: from the catch until the oar perpendicular to the boat (1) and from this point to the finish (2). Main article:

The number of strokes executed per minute by a crew. Main article:

Conditional exercise where the purpose is to increase the stroke and bring more in the comfort zone of a rower. Main article:

Rowing with one oar on one side of the boat. In a sweep boat, each rower has only one oar. 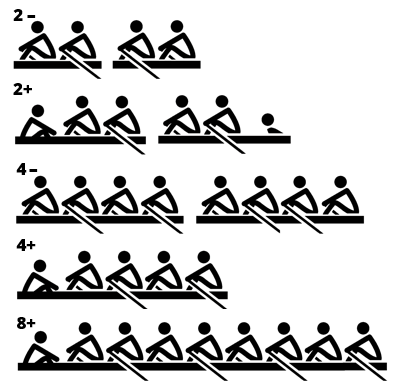 An (obsolete) view of the rowing stroke where the majority of the draw 's power is delivered in the second half. Not to be confused with accelerated draw, compensating for the acceleration of the boat.

A feeling in the boat when the rowers are driving and finishing their strokes strongly and getting good layback.

Mistake where the water is tapped at the same moment during the recovery. Main article: