Back down or Backwater

A reverse rowing action to propel the boat backwards.

Water thrown back toward the bow direction by the blade as it enters the water. Less is best. This indicates that the blade has been properly planted before the rower initiates the drive.

A brace which is part of the rigger of sweep rowing boats, which extends toward the bow from the top of the pin.

The stop mechanism on the seat slides which prevents the rower's seat from falling off the sliding tracks at the back end (towards the boat's bow) of the slide tracks.

Tool to teach rowers how to use core stability to resist boat disturbances. Main article:

Battle of the sides

Crew exercise for sweep boats to train the crew in keeping balance and the boat level. Main article:

Battle of the sides.

Boat type, resembling a smooth boat with an outer keel. Used as a practice boat.

Behind the work distance

Rigging element where the maximum distance is given in the longitudinal direction of the boat between the center of the oarlock pin and the back of the seat, when the seat is placed as far away as possible. Main article:

Distance through the work.

Mistake where the rower sits too bend forward before the catch. Main article:

Too far body over.

Mistake where the rower sits too upright before the catch. Main article:

Too little body over.

Rowing simulator on pontoon or shore where the rower can practice the stroke equally to a rowing tank but cheaper and simpler. The oars used here have large holes, so that they can easily pass through the water. Main article:

The spoon or hatchet/cleaver shaped end of the oar, that transfers the pressure from the oar to the water. Usually painted in the colours of the club represented by the rower.

Mistake where during the recovery where the blade(s) move(s) towards and away again from the water. Main article:

Rigging element that gives the angle at which the blade stands in the water. Main article:

Exercise where the blade height above the water is varied and the rower becomes more aware of this. Main article:

Mistake where the handle(s) is/are not moved down and the blade is only turned. Main article:

Rigging element. The degree to which the riggers of the boat and the boat itself deform when one of the riggers is loaded with a weight of 10 kg. Main article:

Amount of forward lean of rower's trunk from hips at the catch.

End of the boat that travels through the water first and is sharpest. rower that sits in the seat position nearest this end of the boat.

A small, soft ball no smaller than 4 cm diameter securely attached to a rowing or sculling boat's bow. Compulsory on all rowing boats for safety, but also used in deciding which boat crossed the finish line first in very close races.

A card displaying the lane number assigned to the boat for a race.

Two rowers closest to the front of the boat.

The person stroking the boat has their oar on the bowside (starboard or right) rather than the usual strokeside of the boat.

A shell in which the coxswain seat is near the bow of the boat rather than its stern. The seat in a bow loader partially enclosed and is designed so that the coxswain is virtually lying down, in order to reduce wind resistance and distribute the coxswain's weight so as to create a lower center of gravity. 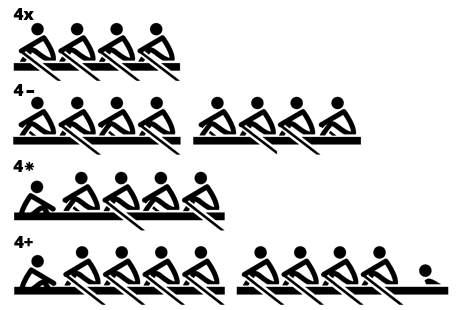 A way of rigging a boat so that a pair of rowers both row on the same side of the boat, contrary to rigging on alternate sides. In eights, double and triple buckets are possible also known as German rigged, Italian rigged or tandem-rigged.

A bumps race is a form of rowing race in which a number of boats chase each other in single file, each crew attempting to catch and bump the boat in front without being caught by the boat behind. A boat is considered bumped when there is no light between the stern of the bumped boat and the bow of the bumping boat. Other types are the:

Head race and the:

A small number of strokes (usually less than a minute) taken at full pressure in training.