Boat with two sweep rowers. The Coxless pair (2-), often called a straight pair, is a demanding but satisfying boat to master. Coxed pairs (2+) are rarely rowed by most club and school programs. It is no longer an Olympic class event, but it continues to be rowed at the World Rowing Championships. 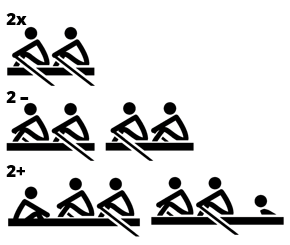 Exercise in which the recovery is briefly interrupted (pause) during the recovery. The coxswain or rower giving commands will indicate where in the recovery this pause should be taken. Main article:

Pausing before the catch

Mistake, waiting a while before making the catch. Main article:

Pausing before the catch.

A specified distance with a particular goal. Pieces are usually acknowledged by the coach: "We will do a piece".

Exercise that involves rowing only with the legs. Main article:

The vertical metal rod (spindle) on which the oarlock rotates

A type of glove covering the handle as well as the hand holding the handle. These allow the rower to grip the oar while also warming the hands.

Points are awarded to rowers for winning races. Number of points determines the status of the rower.

Achieve (win) 1st place in a competition with corresponding medal (a pot).

Conditional exercise where the pressure is varied. Main article:

Exercise in which the draw is extended further and further, starting at the catch. Main article:

Rowing machine to learn to catch the water quick and efficient. Main article:

Exercise in which rowers are successively rowing with arms only, with ¼ seat and with full stroke. Main article:

The advised rowing stroke of the Rowing coach foundation.

The amount of effort applied by the rower to the power phase of the stroke (usually light, ½, ¾, firm or full).

Rapidly building up the pressure that the blade exerts on the water after the catch. Main article:

Mistake where the blade no longer provides propulsion during the last part of the draw. Main article:

Place where at a running start, building up speed is started, so that the boat goes through the start at full speed.

Second step in correcting rowing mistakes, determining the mistake that must be addressed first. Main article:

Disturbances made by an oar blade pulled through the water. The farther the puddles are pushed past the stern of the boat before each catch, the more “run” the boat is getting.

Pull the trunk over the handle(s)

Mistake where the trunk becomes more horizontal during the last part of the draw, where the arms are pulling. Main article:

Pull the trunk over the handle(s).

Pulling up the shoulders

Mistake where the shoulders are moved up and down, instead of forth and back. Main article:

Pulling up the shoulders.

Conditional exercise where the duration of the high pressure strokes is made shorter and the longer again. Main article: