Stable boat with a coxswain and four rowers in it, each with one (C4+) or two oars (C4x+).

The presence of the correct rhythm. Also see:

The deck of the bow and stern of the boat, which were traditionally covered with canvas. It includes the area from the bow to the open area (where the rower sits) and from the open area to the stern. Often used to as a description of how much a race was won or lost by.

Bolts that hold the classical riggers on the boat.

The part of the stroke at which the oar blade enters the water and the propulsive force is applied. Immersion and force application should be indistinguishable actions. Main article:

The pint where the blade enters the water.

Catching with the trunk

Mistake where the trunk, instead of the stretched arms, is used to place the blade in the water. Main article:

Catching with the trunk.

Open rowing boat, which is narrower than a

The amount of interruption of the forward movement—that occurs at the catch. As a rower becomes better, the goal at the catch is to reduce the check.

Exercise: oars with vertical blades in and out of the water, while keeping the boat in balance. Main articles:

Clip-on Load Adjusting Mechanism. Ring on the sleeve - between oarlock and collar - placed is to lighten the oar. Main article:

Rigger made of several round tubes, which is attached to the side of the boat and which requires a construction with trusses. Also see:

Movable ring that is attached below or above the oarlock and with which the oarlock height can be changed. Main article:

A wide plastic ring placed around the sleeve of an oar that is pressed against the oarlock when rowing. The collar stops the oar from slipping through the oarlock.

Predefined/standarized sentences used to tell the rowers what to do.

Used to describe the link between the power of an rowers legs to the force applied to the spoon of the blade. Should be made as soon as the catch is taken and held through the trunk muscles for the length of the work section of the stroke.

Place on the oarlock where the flat side of the oar rests against.

Contrast between effort during the draw and relaxation during the recovery, or between the speed of draw & initial away and rest of the sliding.

Fixing the trunk, so that it moves with the boat like a mast on a ship. Main article:

Crew boat without a Coxswain. 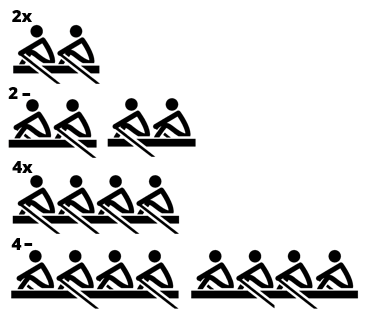 Person who steers the boat by means of strings or wires attached to the rudder. Can be positioned in either the stern or bow of the boat. The coxswain is responsible for steering, commanding and race strategy.

Crab, or Catch a crab

A rowing error where the rower is unable to timely remove or release the oar blade from the water and the oar blade acts as a brake on the boat until it is removed from the water. This results in slowing the boat down. A severe crab can even eject a rower (colloquially an "ejector crab") from the shell or capsize the boat (unlikely except in small boats). Occasionally, in a severe crab, the oar handle will knock the rower flat and end up behind them, in which case it is referred to as an 'over-the-head crab.'

Crew does not support the stroke

Crew mistake where the rowers do not follow and thereby support the stoke on stroke rate and pressure. Main article:

Crew does not support the stroke.

Mistake where the rower brings his body not straight through the boat but leans towards one of the sides. Main article:

Part of the construction of a wooden boat : two slats that run in the shape of an “X” under the slidings.